Universal Hollywood’s Wizarding World of Harry Potter, a close copy of the original “land” at Orlando’s Islands of Adventure with some subtle upgrades, is an amalgamation of landmarks, creatures, and themes that are faithful to the films and books. You access the area through its main entrance, an imposing gate adjacent to the DreamWorks Theatre that leads to The Wizarding World’s primary shopping and dining area, Hogsmeade, a village depicted in winter and covered in snow. (A secondary entryway is found between The Simpsons Ride and the Studio Tour escalator, but it may be restricted to exit-only traffic.) 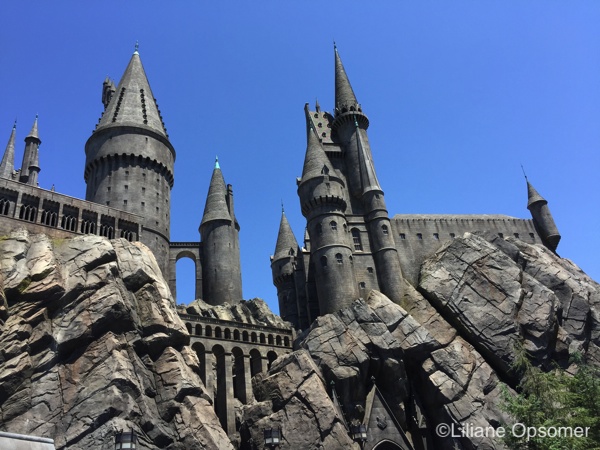 The towering castle houses Hogwarts School of Witchcraft and Wizardry, flanked by the Flight of the Hippogriff kiddie coaster and Hagrid’s Hut. The grounds and interior of the castle contain part of the queue for the super-headliner Harry Potter and the Forbidden Journey. Universal went all out on the castle, with the intention of creating an icon even more beloved and powerful than Sleeping Beauty Castle at Disneyland. 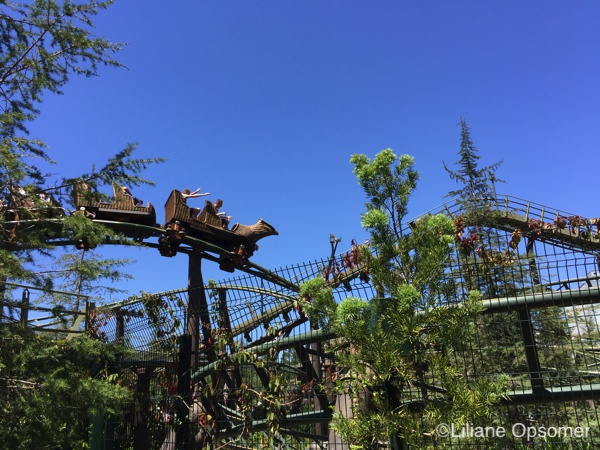 In front of the gate, the Hogwarts Express locomotive sits belching steam, and a small station houses a train-themed gift shop. The village setting is rendered in exquisite detail: Stone cottages and shops have steeply pitched slate roofs; bowed, multipaned windows; gables; and tall, crooked chimneys. Add cobblestone streets and gas streetlamps, and Hogsmeade is as reminiscent of Sherlock Holmes as it is of Harry Potter. 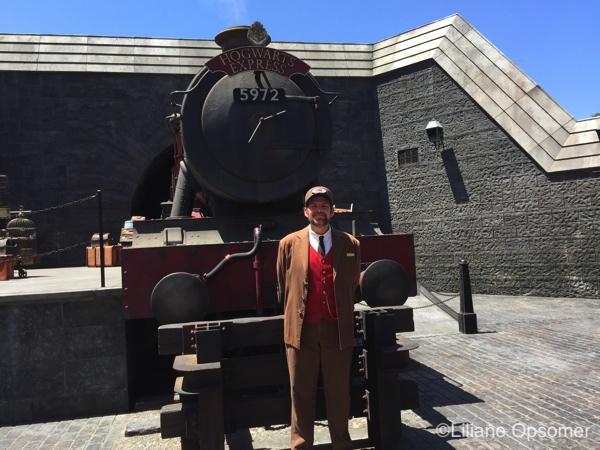 Your first taste—literally—of the Harry Potter universe comes courtesy of Honeydukes. Specializing in Potter-themed candy such as Acid Pops (no flashbacks, guaranteed), Tooth Splintering Strong Mints, and Fizzing Whizzbees, the sweet shop offers no shortage of snacks that administer an immediate sugar high. The big draw is the elaborately boxed Chocolate Frogs; the packaging looks as if it came straight from a Harry Potter film, complete with wizard trading card. Taking up a small corner of Honeydukes is Zonko’s Joke Shop, selling toys such as Fanged Flyers (Frisbees with teeth) and adorable Pygmy Puff dolls. 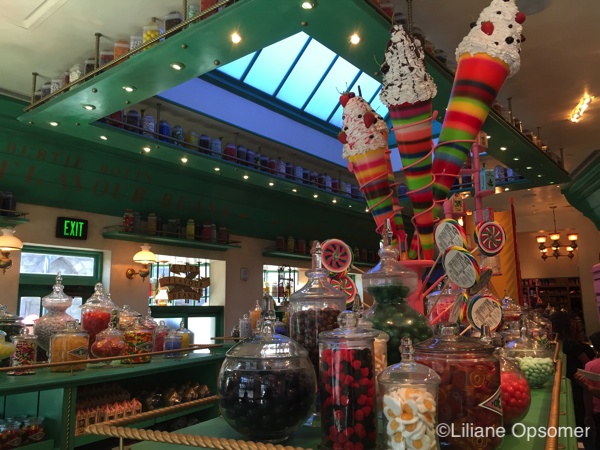 Next door to Honeydukes and set back from the main street is Three Broomsticks, a rustic tavern serving English staples such as fish-and-chips, shepherd’s pie, bangers and mash, and Guinness stew. To the rear of the tavern is the Hog’s Head pub, which serves a nice selection of beer and is the quickest place to get The Wizarding World’s signature nonalcoholic brew, Butterbeer (vanilla soda with butterscotch–marshmallow foam, available cold, frozen, or, in cooler months, hot). There’s even Butterbeer fudge (tooth-shatteringly sweet) and Butterbeer potted cream (like butterscotch pudding in a jar), though Butterbeer soft-serve ice cream wasn’t imported from Orlando’s Diagon Alley. For the adults, exclusive beers are available; we like the Wizard’s Brew, a rich chocolate stout. If all that imbibing inspires you to heed nature’s call, be warned that Moaning Myrtle haunts both the men’s and ladies’ sides of the land’s only facilities; hearing her cries while you’re trying to go can be distracting to say the least. 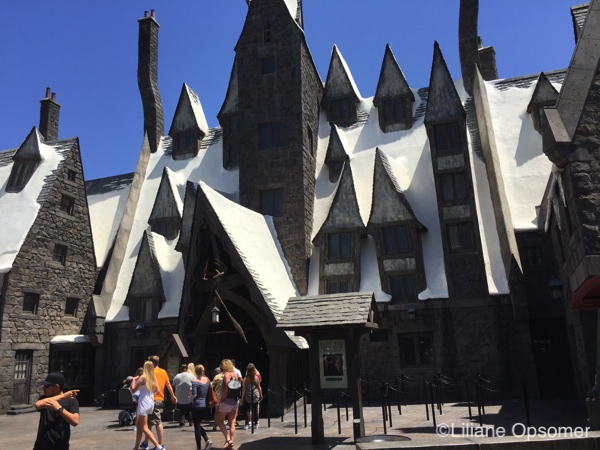 On the far side of the pub is Ollivanders, where young wizards are matched with magic wands (see the full description on page 345) in a brief but charming show. Adjoining the wand shop (where you can browse without queuing for the show) is Wiseacre’s Wizarding Equipment, where you can buy binoculars or telescopes.

Roughly across the street from the pub, you’ll find benches in the shade at the Owlery, where animatronic owls (complete with lifelike poop) ruffle and hoot from the rafters. Next to the Owlery is the Owl Post, where you can have mail stamped with a Hogsmeade postmark before dropping it off for delivery. The Owl Post also sells stationery, school supplies, and toy owls. Here, once again, a nice selection of owls preens on the timbers overhead. The Owl Post is attached to Dervish and Banges, a magic supplies shop selling brooms and Quidditch equipment, and Gladrags Wizardwear, ground zero for getting outfitted in fashionable school robes.

Finally, at the exit of Hogwarts Castle is Filch’s Emporium of Confiscated Goods, which offers all manner of Potter-themed gear, including Marauder’s Maps, magical creature toys, film-inspired chess sets, and, of course, Death Eater masks (breath mints extra). In keeping with the stores depicted in the Potter films, the shopping venues in The Wizarding World of Harry Potter Hogsmeade are small and intimate—so intimate, in fact, that they feel congested when they’re serving only 12-20 shoppers. USH also sells most of its Potter merchandise, including wands, at two easily accessible stores near the park entrance.

Throughout the day, there is fabulous live entertainment. Don’t miss the Hogwarts Frog Choir and the Triwizard Spirit Rally! 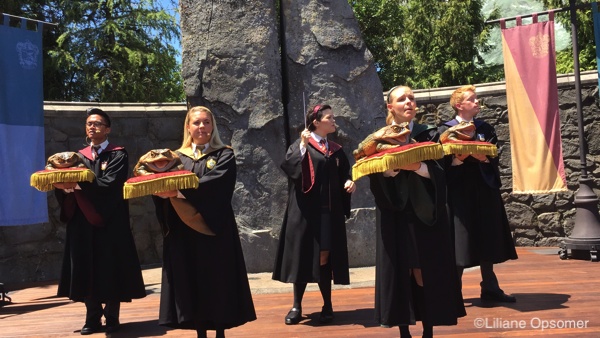 For those who have been to the original Wizarding World in Orlando, visiting Hollywood’s version is somewhat surreal. Though at first glance everything is superficially the same—except for the obvious absence of the Dragon Challenge roller coaster—there are numerous disorienting differences, starting with the fact that you can see neighboring attractions poking up between the buildings of Hogsmeade, as well as majestic California mountains (standing in for the Scottish Highlands). Universal’s scenic artists (led by film series art director Alan Gilmore) have compensated for the location’s lack of immersiveness by layering additional details throughout the land, from rockwork and cinematic murals on exposed show buildings to extra grit and grime on the buildings. Orlando-based Potter fans should be a bit jealous of the upgraded interactive shop windows and much-needed elbow room afforded by a new pedestrian area behind the Owlery, and first-time visitors to The Wizarding World will be blown away by Hollywood’s thrice-refined iteration of the acclaimed area.

Make sure to end the day with the Nighttime Lights at Hogwarts Castle, an all-new, stunning sound-and-light show projected against the majestic backdrop of Hogwarts castle. The show is performed several times nightly. 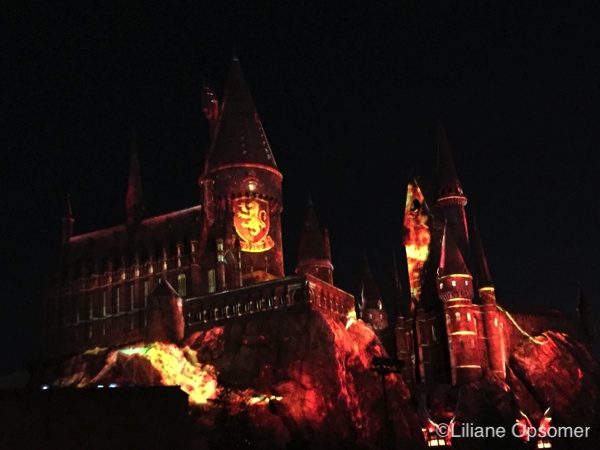 After a somewhat slow start, Hollywood’s Potter attractions have attracted a stampede of interest from locals and tourists alike. Prepare for the land to be packed to the gills if you visit during a peak period. Guests who purchase advance tickets online or book a vacation package, including admission and a room at a designated Preferred Hotel, are granted early park admission to The Wizarding World 1 hour before the general public; if you are eligible for this perk, it’s your best way to experience the headliner ride and browse the shops with minimal waiting. If the Hogsmeade area reaches maximum capacity (a little more than 6,000 guests), you may need to queue just to enter the land, and then queue again for the individual attractions once inside. If you can’t use early entry, your best bet for experiencing Harry Potter may be to bypass the daytime rush and wait until after sundown, when you should be able to enter without waiting. The evening illumination makes Hogwarts even more magical, and wait times are often minimal in the hour before closing.

The Unofficial Guide to Disneyland by Seth Kubersky, Bob Sehlinger, Len Testa, and Guy Selga Jr. covers The Wizarding World of Harry Potter and everything there is to see at Universal Hollywood, Disneyland, and Disney’s California Adventure. For a review of the highlights of Hogsmeade at Universal Orlando, check out our post here. If you enjoyed this post please sign up for our newsletter.