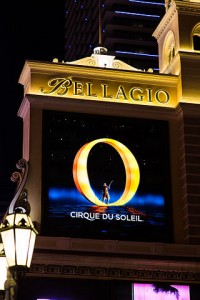 O plays at the Bellagio

Cirque du Soleil  has taken Las Vegas by frontal assault. As of 2015, there are eight Cirque du Soleil productions playing Las Vegas showrooms. First to open was Mystère at TI, followed some years later by “O” at the Bellagio.

The third show to premier was Zumanity at New York–New York, with KÀ at the MGM Grand following close on its heels in 2005. Cirque’s production LOVE, based on the music of the Beatles, opened in June of 2006; CRISS ANGEL Believe opened in September of 2008; Zarkana, an acrobatic tour de force, opened in November 2012; and Cirque’s latest effort, Michael Jackson ONE, opened in 2013, celebrates the music and dance of Michael Jackson.

If you’ve never seen a Cirque du Soleil show, understand that Cirque productions completely redefine and elevate circus as a genre. They feature the best and most original circus acts you’re ever likely to see, but those acts are woven into a whole that includes beloved char­acters, stunning costuming, deep symbolism, poignant drama, cutting-edge theatrical technology, and original musical scores. If you’ve seen a Cirque traveling production and were awed, you won’t believe what Cirque is capable of in its Las Vegas custom-built theaters.

Zarkana, KÀ, Mystère, LOVE, and “O” are representative of Cirque shows everywhere, albeit on a grand scale, and are appropriate for all ages. Also appropriate for families is Michael Jackson ONE, an acrobatic and choreographic spectacular. Zumanity, an in-your-face celebration of everything sexual, is much different from the other productions.

CRISS ANGEL Believe likewise breaks the mold and has only staging, lighting, and costumes in common with the other shows. All Cirque shows provide an awe-inspiring evening of entertainment, so you really can’t go too wrong (assuming, in the case of Zumanity, that you’re comfortable with the sexual content).

How to Choose a Cirque du Soleil Show

In choosing a Cirque show, I suggest you start with Mystère. That’s where it all started, and it’s still the best. From there, let your taste guide you. If you’re really into the Beatles or Michael Jackson, see LOVE or ONE next. “O” and KÀ feature unique technological stagecraft that is totally captivating.

Tickets for Mystère and Zumanity sell at $25–$45 less than for the other Cirque productions, making them by far the best value.

Credit for picture used in this blog:

By Michael Gray [CC-BY-SA-2.0], (The Beatles) via Wikimedia Common