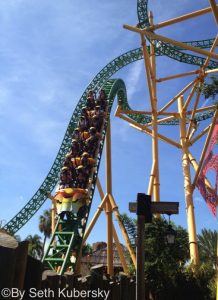 Spanning 335 acres, Busch Gardens combines elements of a zoo and a theme park. The park is divided into nine African-themed regions (as you encounter them moving counterclockwise through the park): Morocco, Egypt, Nairobi, Pantopia, Congo, Jungala, Stanleyville, Sesame Street Safari of Fun, and Bird Gardens. A haven for thrill-ride fanatics, the park has several roller coasters that are consistently rated among the top five in the country. Busch Gardens is more than thrill fare, however, with beautiful landscaping, excellent shows, and really wonderful children’s play areas.

Busch Gardens is famous for its high-speed rides. Busch officials label Cheetah Hunt a launch coaster, driven by a series of magnets—officially, a linear synchronous motor propulsion system. It is the park’s first coaster with an onward surge that’s not powered simply by gravity after the climb to the starting hill. Instead, Cheetah Hunt boasts three bursts of acceleration—up to 30 miles per hour as it starts, as well as at unexpected moments; suddenly up to 60 miles per hour; and after a slower stretch, back up to 40.

The riders climb to a height of 102 feet—providing a magnificent (if rapid) view of the animal-filled Serengeti Plain—before plunging 130 feet as they rush through a trench. The 16-passenger trains race through several rolling turns and a full inversion—you’re held in place by shoulder bars that are double-locked with a belt attached to the seat—over the 4,429-foot track. Thrill seekers experience four times the pull of gravity. Cheetah Hunt is designed to be smooth and accessible to a wide range of riders who may be intimidated by SheiKra, Montu, and Kumba; though it will put a smile on your face, Cheetah Hunt won’t make you scream your head off like those powerhouse coasters. Five of the trains can operate simultaneously; park executives estimate that they can move 1,370 passengers per hour. 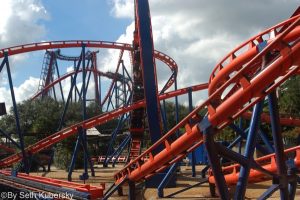 The Scorpion coaster pales in comparison to big sisters Kumba and Montu. In spite of its small stature, with speeds of 50 miles per hour, a 360-degree vertical loop, and three 360-degree spirals, it’s nothing to sneeze at. Lines are rarely long for this attraction, but because the coaster doesn’t have the high capacity of Kumba or Montu, the line moves slowly. Ride after the major coasters and Falcon’s Fury, or save the ride for the afternoon, when the wait is almost always shorter. 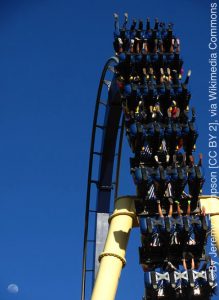 Montu is an inverted steel super roller coaster. Seats hang below the track and riders’ feet dangle on this intense roller coaster, which is among the top 20 in the country and among the best we’ve ever ridden. The fast-paced but extremely smooth ride begins with a 13-story drop. Riders are then hurled through a 104-foot inverted vertical loop. Speeds reach 60 miles per hour as riders are accelerated through more dizzying loops and twists, including an Immelman, an inverse loop named after German World War I fighter pilot Max Immelman.

Riding in the front gives you a clear, unobstructed view of everything around you. We definitely recommend the front row. Look for the special front-seat queue once you enter the load station. The wait for the front is usually an extra 20 minutes, but it’s worth it for the thrill.

In 2014 Busch Gardens added another record-breaking scream producer: Falcon’s Fury, a 300-foot plummet, with the riders facing down toward their onrushing doom. Falcon’s Fury is the centerpiece of Pantopia, the pan-cultural land with an eye-popping color palette that replaced the drab former Timbuktu theme. 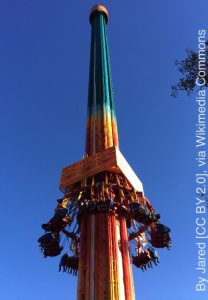 At the base of a 335-foot freestanding column (the tallest such tower in North America when it opened), 32 passengers at a time climb into seats and pull down an over-the-shoulder safety bar with a comfortable padded chest restraint. Riders are then lifted approximately 300 feet above the pavement, affording an excellent view of downtown Tampa before the seats rotate forward 90 degrees so that you are facing down. After a random number of seconds (a particularly nerve-racking touch), the seats are released into true free fall for more than 5 seconds, reaching speeds of 60 miles per hour. Just before you reach the ground, your seat is returned to an upright position as 3.5 gs of braking force are applied, so that your feet (not face) touch terra firma first.

Falcon’s Fury isn’t for the faint-hearted, and even a single glance at it from the parking lot is enough to make thrill-ride addicts apprehensive; this thing makes Disney’s Tower of Terror look like a kiddie bounce house. But the truth is that the anticipation on the way up is the worst part; once the free fall begins, your prone position prevents your stomach from leaping into your mouth, and you’re free to enjoy a brief moment of zero-gravity weightlessness before the brakes bring you to a surprisingly smooth stop. If you can get up the nerve, this is the closest you’ll come to skydiving without strapping on a parachute. 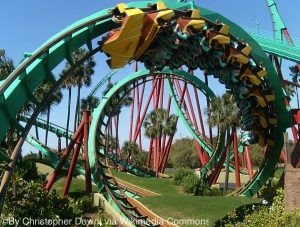 Kumba’s dramatic loops rise above the treeline in the Congo area, with a trainload of screaming riders twisting skyward. Just like sister coaster Montu, Kumba is one of the best in the country. Unlike Montu, Kumba’s trains sit on top of the track as it roars through 3,900 feet of twists and loops. Reaching speeds of 60 miles per hour, Kumba is certainly fast, but it also offers an incredibly smooth ride. This is good because the coaster’s intense corkscrews will churn your insides something fierce. Thrilling elements include a diving loop, a camel-back with a 360-degree spiral, and a 108-foot vertical loop. Kumba resembles Islands of Adventure’s Incredible Hulk Coaster (another Bolliger & Mabillard creation) without the initial launch or boring back half; Kumba maintains its ferocious pace from the first drop to the final brake run like few rides can.

Kumba is one of the few coasters ever to make Seth Kubersky, couthor of Beyond Disney: The Unofficial Guide to SeaWorld, Universal Orlando, & the Best of Central Florida, gray out from excessive g-forces; whether that’s a warning or an endorsement depends on your tolerance. 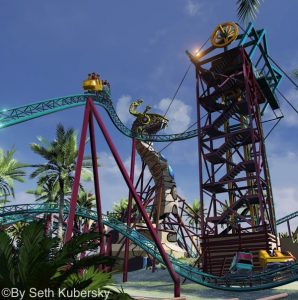 On June 17th, the park added another thrill ride as Cobra’s Curse joined the impressive roller-coaster lineup in Busch Gardens as a family-focused stepping-stone between the Air Grover kiddie coaster and Cheetah Hunt’s high-speed launch. Located in the Egypt area behind the defunct King Tut’s Tomb walk-through, the 2,100 feet of steel track for Cobra’s Curse required partial rerouting of the Serengeti Express train tracks. It’s topped by an 80-foot-tall snake sculpture that riders confront face-to-face. A first-of-its-kind design from Germany’s MACK Rides, the new coaster takes eight riders at a time, seated back-to-back in tandem cars, up an elevator-like vertical 70-foot lift, before sending them spinning in circles at up to 40 miles per hour. Parts of the old Tut’s Tomb have been repurposed as an air-conditioned queue for Cobra’s Curse.

SheiKra – The tallest coaster in Florida 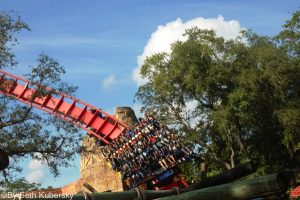 This attraction is 200 feet tall, making it the tallest coaster in the state of Florida (for now), and it’s one of only nine dive coasters that exist anywhere. (A dive coaster is a ride with a completely vertical drop.) Also incorporated are twists, swooping turns, a second huge plunge, and a tunnel of mist. The drops aren’t just steep—riders hurtle down at an average of 70 miles per hour. The car has three rows with eight seats across, so there are no bad seats. Any seat on SheiKra is second only to the front row of Montu, especially since the coaster’s floor was removed.

You cannot take anything on this ride and must use a locker found across from the entrance; there are also cubbies for last-minute things you might have in shirt or blouse pockets. If you are planning on hitting any of the nearby water rides soon after, keep your gear in the locker.

For a descriptions of all of the fabulous attractions that Busch Gardens has to offer, check out Beyond Disney: The Unofficial Guide to SeaWorld, Universal Orlando, & the Best of Central Florida by Bob Sehlinger and Seth Kubersky.