Darcie Vance, a researcher at The Unofficial Guides to Las Vegas, recently saw the “Just a Girl” Gwen Stefani show at Planet Hollywood Las Vegas. Here is her review. 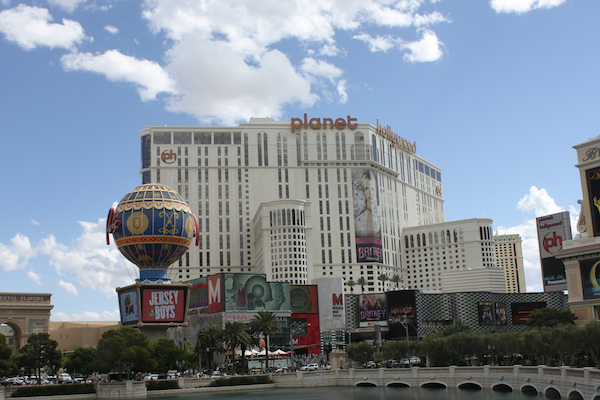 Grammy award-winning singer Gwen Stefani began her residency at Planet Hollywood’s Zappos Theater on June 27th. Her career spans decades, and her show encompasses the hits from her early days with No Doubt to her solo work.

The costumes may change throughout the nearly two-hour show, but the energy is almost always high. When walking into the Zappos Theater, you’ll notice signs saying that standing is encouraged. For those in the General Audience area, you will be standing in the pit for the entire show. For those with seats, most of the time everyone will be standing; sadly, the seat rows are not wide enough for dancing, so just swaying to the beat and jumping will have to do. 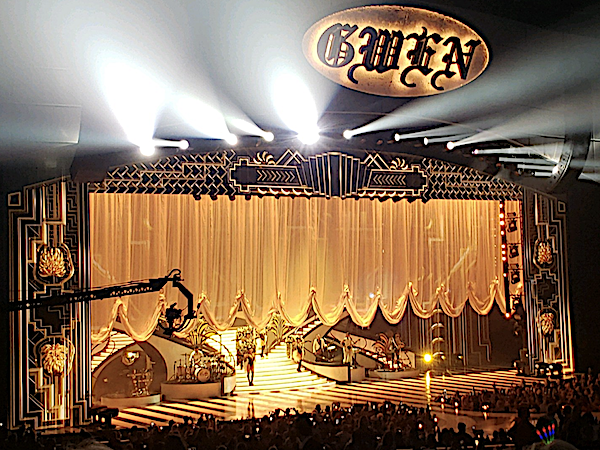 The focal point of the stage is a large lit staircase that changes style depending on songs and costumes. For her first numbers, the stage feels like old Hollywood. Gwen begins the show with her dozen backup dancers carrying larger than life B-A-N-A-N-A-S in a very Busby Berkeley way, while her live band (including horn section) plays along. For such hits as “Spiderwebs” and “Sunday Morning,” the stage becomes a big neon house, as Gwen skanks around in her sparkly combat boots. Toward the end of the show, she is elevated on a rose-covered platform for the ballad “Don’t Speak.” Gwen manages to mix in a few covers along the way, but the show is mostly her own material. The closing songs feature Gwen in a sparkly cowgirl outfit as a special nod to her boyfriend, Blake Shelton. 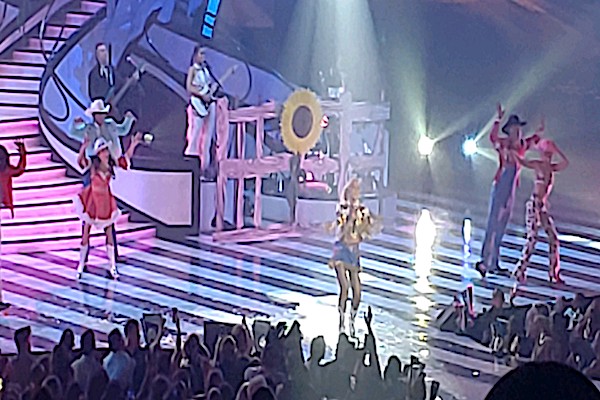 Gwen Stefani manages to hit the right notes, mixing the glamour and energy of a Vegas show with the down-to-earth persona that she gives off. During costume changes, Gwen gives the audience a special look into her life with a few prerecorded videos that include pictures and home movies narrated to tell the story of how she became the woman she is today.

Another down-to-earth move made with this residency is that $1 of each ticket sold will be donated to the Las Vegas Cure 4 The Kids Foundation.

Tickets are on sale now through March 2019. For more information, visit the website of Planet Hollywood or get your tickets from Ticketmaster.