Renee Sklarew, coauthor of The Unofficial Guide to Washington, D.C., takes us to the National Museum of African American History and Culture (NMAAHC).

It’s been more than two years since the long-awaited Smithsonian museum opened its doors, and the crowds keeping coming. Travelers visiting Washington, D.C., who want to tour the National Museum of African American History and Culture (NMAAHC) must plan in advance by reserving a timed entry ticket. Visitors can also try for same-day tickets, but there’s no guarrantee they’ll score one of those.

Adorned with bronze lattice, the NMAAHC strikes a unique profile both for its color and unusual design. The architects behind the NMAAHC are David Adjaye and Philip Freelon. The team sought to create a building that could tell the complicated history of African Americans in the United States. They designed the building to provide ample space to display the museum’s countless artifacts and worked to “represent the past, present and future of the African American experience.”

The museum opened on September 24, 2016, and its shape is reminscent of three-tiered crowns found in the Yoruban art of West Africa. The bronze ironworks encircling the three tiers symbolize work crafted by enslaved African Americans living in the American south.

Upon entering the eight-story building, you’ll find yourself in an expansive Heritage Hall. From there, you can check your coats and bags before beginning your tour on Level C. Take the escalator down one floor to enter the History Level. Next, you’ll take an elevator that represents a “time machine” taking you back to the 1400s.

The first exhibit captures the dark horror of the TransAtlantic Slave Trade. It demonstrates what is called the Middle Passage, when colonial-era ships transported milions of captured Africans across the Atlantic Ocean to the Caribbean, South America, and North America. Twelve million enslaved individuals were transported to North America alone.

Next, the museum focuses on the time period from 1790 until 1861 and describes various uprisings, along with notable contributions made by freed black Africans living in North America. For example, the first man to be shot while peacefully protesting during the Boston Massacre was an African American man. 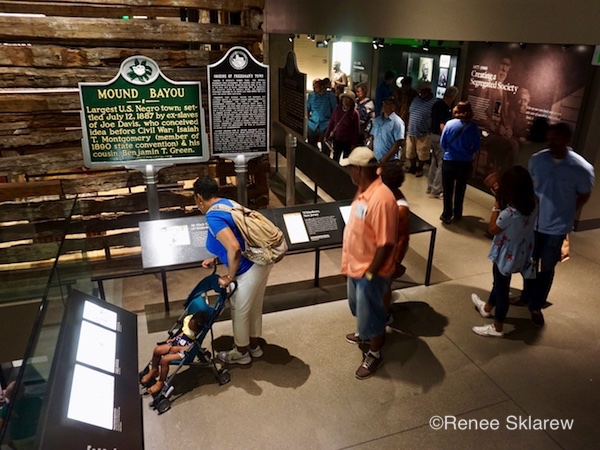 As you continue through the lower level of NMAAHC, you will learn about several African Americans who participated in the nation’s growth and development, despite facing crushing discrimination—African Americans like Benjamin Banneker, a scientist and astronomer who surveyed the District of Columbia’s borders. The exhibit also contains moving artifacts like Nat Turner’s Bible, Harriet Tubman’s shawl, tiny iron shackles that must have been worn by a small child, textiles, and a cotton gin.

The exhibit moves into a large open atrium to the pre-Civil War era called the Paradox of Slavery. Here you’ll see examples of slavery in America using poignant displays—a slave cabin, advertisements seeking escaped slaves, and leaders who spoke out against slavery. 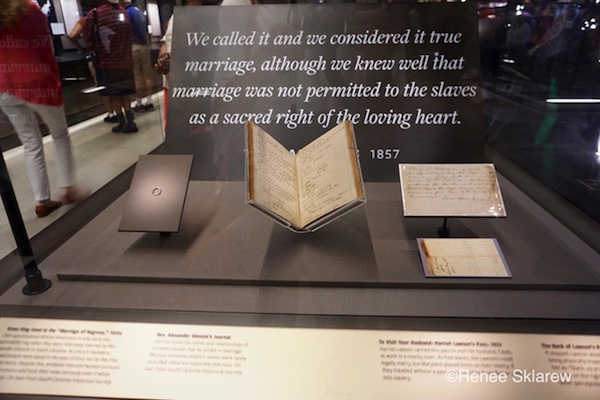 Some of these people are represented in statues of both African Americans and white abolitionists, including Sojourner Truth, Phyllis Wheatley, Elizabeth Freeman, and Toussaint Louverture. These individuals, despite the threat to their own safety, raised their voices against this scourge on the country. 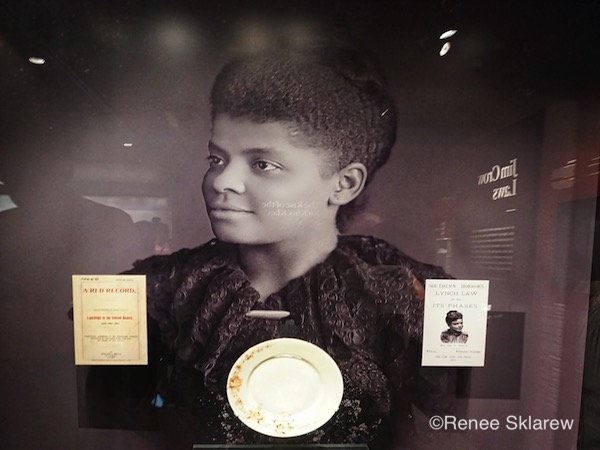 The next section focuses on the Civil War and African Americans who fought beside Union soldiers. 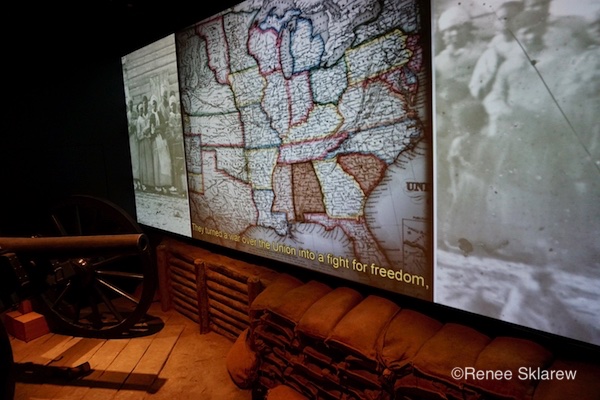 There is a section focused on Emancipation, which eventually leads out of this dark part of the museum into Segregation in 1876 through 1968. Here you’ll see a segregated rail car and interactive lunch counter to illustrate the many struggles African Americans faced after the Civil War. 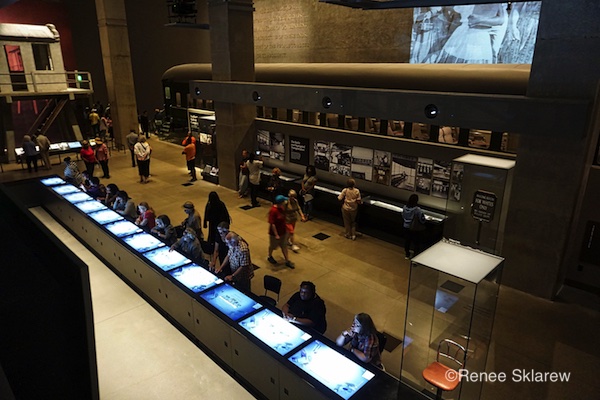 You’ll move on to the Jim Crow Era, when a climate of fear, discrimination, and terror led to incarceration and frequent lynchings, with a small alcove containing Medgar Evers’s casket. The exhibit describes the significance of the Plessy vs. Ferguson case, which declared that education and other rights for African Americans would be “separate but equal.” The next level features the accomplishments of African Americans in 1968 and beyond. Important contributors like the Tuskegee Airmen, Martin Luther King Jr., and Malcom X are represented—leaders who helped mold the future of America.

The second floor contains an interactive gallery and a place to chart your own family’s history. Above that, on the third floor, are thematic exhibits that focus on cultural contributions of African Americans, including a section on African Americans who served in the military.

The fourth floor is the most joyous. Here is an uplifting exhibit on African American heroes in sports, including Wilma Rudolph, Muhammad Ali, Michael Jordan, Dominique Dawes, and Serena and Venus Williams, to name a few. The important stance taken by the Olympians who expressed “black power” is represented with a standout statue in this area. 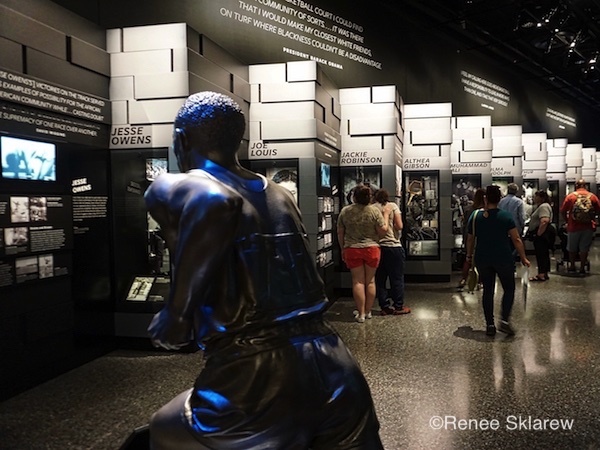 Another section, called Musical Crossroads, focuses on the arts. In particular, musical talents from Michael Jackson to James Brown and so many others are showcased. You’ll see various artifacts like costumes, guitars, and even George Clinton’s Mothership. 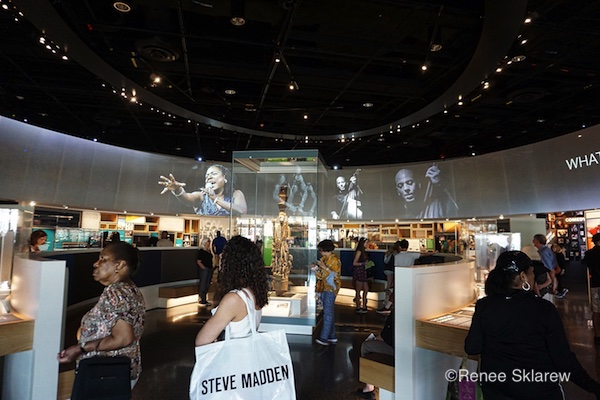 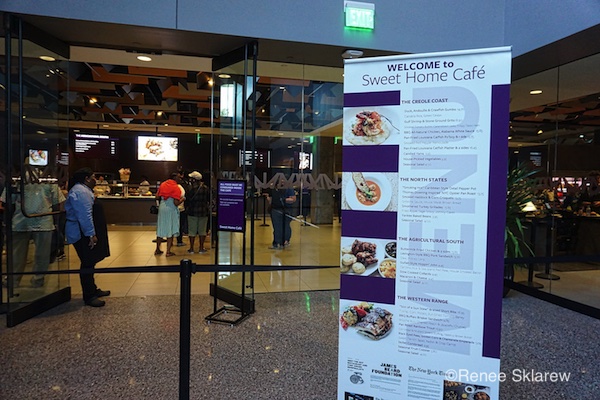 To visit the NMAAHC, please make your advance reservations here. The new “Watching Oprah” exhibit opened June 8th and will run through June 2019. The closest Metro stops are Federal Plaza, Metro Center, and the Smithsonian. For more information, visit the museum’s website.